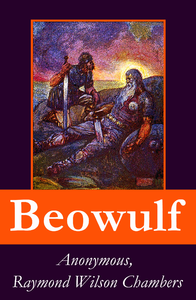 This carefully crafted ebook: “Beowulf (Complete Bilingual Edition: Original Anglo-Saxon Edition + 3 Translations + Extensive Study + Footnotes, Index and Alphabetical Glossary)” contains 5 books in one volume and is formatted for your eReader with a functional and detailed table of contents.
Beowulf is the conventional title of an Old English heroic epic poem consisting of 3182 alliterative long lines, set in Scandinavia, commonly cited as one of the most important works of Anglo-Saxon literature. It survives in a single manuscript known as the Nowell Codex. Its composition by an anonymous Anglo-Saxon poet is dated between the 8th and the early 11th century. In 1731, the manuscript was badly damaged by a fire that swept through a building housing a collection of Medieval manuscripts assembled by Sir Robert Bruce Cotton. The poem's existence for its first seven centuries or so made no impression on writers and scholars, and besides a brief mention in a 1705 catalogue by Humfrey Wanley it was not studied until the end of the eighteenth century, and not published in its entirety until the 1815 edition prepared by the Icelandic-Danish scholar Grímur Jónsson Thorkelin.
In the poem, Beowulf, a hero of the Geats in Scandinavia, comes to the help of Hroðgar, the king of the Danes, whose mead hall (in Heorot) has been under attack by a monster known as Grendel. After Beowulf slays him, Grendel's mother attacks the hall and is then also defeated. Victorious, Beowulf goes home to Geatland in Sweden and later becomes king of the Geats. After a period of fifty years has passed, Beowulf defeats a dragon, but is fatally wounded in the battle. After his death, his attendants bury him in a tumulus, a burial mound, in Geatland.
The numerous different translations and interpretations of Beowulf turn this monumental work into a challenge for the reader.
This ebook contains 5 books in one ebook:
1) By Anonymous, edited by Alfred John Wyatt: "Beowulf". This is the anglo-saxon original version based on the autotypes (facsimilies) in Julius Zupitza’s edition of 1882.
2) By John Lesslie Hall: "Beowulf - An Anglo-Saxon Epic Poem". This is a 1892 translation of Beowulf into modern english with notes and comments.
3) By William Morris: "The Tale of Beowulf - Sometime King of the Folk of the Weder Geats". This is an 1895 translation of Beowulf into modern english with notes and comments.
4) By: Francis Barton Gummere: "Beowulf". This is a 1910 translation of Beowulf into modern english , with notes and comments.
5) By: Raymond Wilson Chambers: "Beowulf - An Introduction to the Study of the Poem with a Discussion of the Stories of Offa and Finn". Chamber's introduction to Beowulf is the most comprehensive study of the whole problem of this remarkable Anglo-Saxon manuscript.