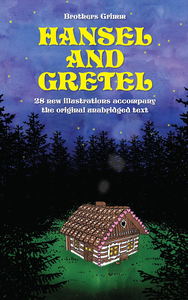 This ebook: “Hansel and Gretel: 28 new illustrations accompany the original unabridged text” is carefully crafted and formatted in a fixed layout which simulates the visual experience of reading a print picture book. This book is created with imaginative and completely new illustrations which accompany the original Brothers Grimm fairy tale.  “Hansel and Gretel” is a well-known fairy tale of German origin, recorded by the Brothers Grimm and published in 1812. Hansel and Gretel are a young brother and sister lost in the woods. After days of wandering, they follow a beautiful white bird to a clearing in the forest and discover a large cottage built of gingerbread and cakes. Hungry and tired, the children begin to eat the rooftop of the candy house. They soon become prisoners of a cannibalistic witch living in this house constructed of cake and confectionery. The two children save their lives by outwitting her. The Brothers Grimm, Jacob (1785–1863) and Wilhelm Grimm (1786–1859), were German academics, linguists, cultural researchers and authors. They are among the best-known storytellers of folk tales, popularizing stories such as "Cinderella", "The Frog Prince", "Hansel and Gretel", "Rapunzel" and "Snow White".