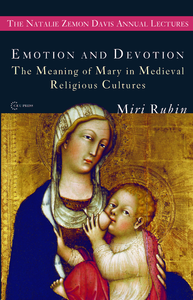 The Meaning of Mary in Medieval Religious Cultures

In Emotion and Devotion Miri Rubin explores the craft of the historian through a series of studies of medieval religious cultures. In three original chapters she approaches the medieval figure of the Virgin Mary with the aim of unravelling meaning and experience. Hymns and miracle tales, altarpieces and sermons – a wide range of sources from many European regions – are made to reveal the creativity and richness which they elicited in medieval people, women and men, clergy and laity, people of status and riches as well as those of modest means. The first chapter, "The Global 'Middle Ages'," considers the current historiographical frame for the study of religious cultures and suggests ways in which the Middle Ages can be made more global. Next, "Mary, and Others" examines the polemical situations around Mary, and the location of Muslims and Jews within them. The third chapter, "Emotions and Selves," tracks the sentimental education experienced by Europeans in the late Middle Ages through devotional encounters with the figure of the Virgin Mary in word, image and sound. Each year one scholar of world fame is invited to present lectures in the framework of the Natalie Zemon Davis Annual Lecture Series at the Central European University, Budapest. This is the second volume in the series of published lectures.