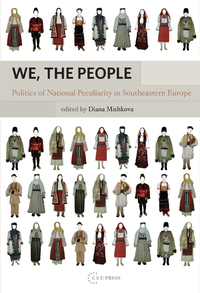 We, the People — Ebook

Analyzes the processes of nation-building in nineteenth and early-twentieth-century south-eastern Europe. A product of transnational comparative teamwork, this collection represents a coordinated interpretation based on ten varied academic cultures and traditions. The originality of the approach lies in a combination of three factors: [a] seeing nation-building as a process that is to a large extent driven by intellectuals and writers, rather than just a side effect of infrastructural modernization processes; [b] looking at the regional, cross-border ramifications of these processes (rather than in a rigid single-country-by-country perspective) and [c] looking at the autonomous role of intellectuals in these areas, rather than just seeing south-eastern Europe as an appendix to Europe-at-large, passively undergoing European influences. The essays explore the political instrumentalization of the concepts of folk, people and ethnos in south-eastern Europe in the “long 19th century” by mapping the discursive and institutional itineraries through which this set of notions became a focal point of cultural and political thought in various national contexts; a process that coincided with the emergence of political modernity. "In the history of emerging national awareness in Europe, the formerly Ottoman- and Habsburg-ruled regions in the continent’s South-East present a case of unusual complexity and interest. South-East Europe combines geopolitical regional cohesion and ethno-linguistic diversity, and witnessed the emergence of a complex cluster of both early and tardy nation-building movements in close proximity and overlap, antagonism and exchange. Hitherto largely underresearched (owing to political conditions and ingrained preconceptions), this south-eastern microcosm of Europe now takes its proper place in the panorama of European intellectual history thanks to this excellent volume. We, the People is a landmark book. It applies the latest theoretical insights and comparatist approaches to a wealth of relevant and fascinating case studies, which, besides their intrinsic importance, are now made available for comparative European and macro-regional historical research." Prof. dr J. Th. Leerssen, Chair of Modern European Literature, University of Amsterdam