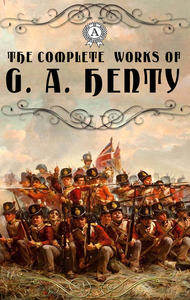 The Complete works of G. A. Henty — Ebook

George Alfred Henty was a prolific English novelist and war correspondent best known for his historical adventure stories.A contemporaries described him as a man of strong will, reasonable ambitions and a hard, steady worker. Henty wrote about eighty books for boys. A young man who worked as his secretary for two years said that Henty used to walkup and down his study smoking his clay pipe and reeling off stories just as fast as the secretary could take them down. Best known for adventure stories such as The Young Bugler, Under Drake's Flag, With Clive in India, When London Burned: Story of Restoration Times and the Great Fire, Moore at Corunna, At Aboukir and Acre, A Story of Napoleon's Invasion of Egypt, With Buller in Natal, With Roberts to Pretoria and With Kitchener in the Soudan, In Freedom's Cause, Under Drake's Flag, In Times of Peril, The Lion of the North and In the Reign of Terror.