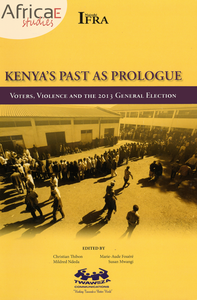 Kenya’s Past as Prologue — Ebook

Voters, Violence and the 2013 General Election

During the run-up to Kenya’s 2013 general elections, crucial political and civic questions were raised. Could past mistakes, especially political and ethnic-related violence, be avoided this time round? Would the spectre of the 2007 post-electoral violence positively or negatively affect debates and voting? How would politicians, electoral bodies such as the IEBC, the Kenyan civil society, and the international community weigh in on the elections? More generally, would the 2013 elections bear witness to the building up of an electoral culture in Kenya, characterized by free and fair elections, or would it show that voting is still weakened by political malpractices, partisan opinions and emotional reactions? Would Kenya’s past be inescapable or would it prepare the scene for a new political order? Kenya’s Past as Prologue adopts a multidisciplinary perspective - mainly built upon field-based ethnography and a selection of case studies - to answer these questions. Under the leadership of the French Institute for Research in Africa (Institut français de recherche en Afrique, IFRA), political scientists, historians and anthropologists explore various aspects of the electoral process to contribute in-depth analyses of the last elections. They highlight the structural factors underlying election and voting in Kenya including the political system, culture and political transition. They also interrogate the short-term trends and issues that influence the new political order. The book provides insight into specific case studies, situations and contexts, thus bringing nuances and diversity into focus to better assess Kenya’s evolving electoral democracy.