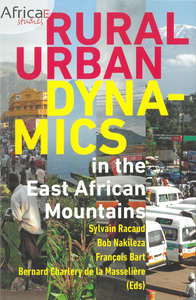 This book is the result of a long-term cooperation between French and East African scholars and universities under the aegis of the French Institute of Research in Africa (IFRA-Nairobi). This book presents the main results of the research program Cooperation for University and Scientific Research (CORUS): Mountains and Small and Medium Cities in East Africa: Environmental Management, Flows of People and Resources, funded by the French Ministry of Foreign Afairs and supported by IFRA-Nairobi. The specific subject is to rethink the development of the East African mountains in relation to the fast growing towns and cities that surround them. Three East-African mountains were chosen: Mount Kenya, Mount Elgon (Ugandan side) and Uporoto Mountains (Tanzania). Comparisons are included, especially with Mount Kilimanjaro, which has been studied in previous books and programs (e.g. Kilimanjaro: Mountain, Memory and Modernity, Mkuki na Nyota, Dar es Salaam, 2006). The authors are East African (Tanzania, Uganda, Kenya) and French scholars, most of them geographers. Made from 12 contributions, this book focuses on a recent change in those mountains: a growing urbanization, which shapes new mountain systems. This phenomenon, which is actually a major upheaval, is the focal point of this book, giving rise to this question: what are the links between Rural-Urban evolution in such contexts? What are the impacts on livelihoods and development? This book, covering social and environmental scientific issues relating to Rural-Urban nature, is the first of its kind for African mountains.