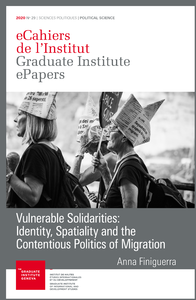 Although there has been a wide range of political responses to migration in Europe, scholarly analyses have shown that state and humanitarian responses have regardless done little to foster the integration of mobile people into host societies, resulting instead in a politics of exclusion. Resistance to such policies has taken the form of independent camps and solidary spaces. Although most analyses of informal camps agree on their emancipatory potential, the same studies have revealed that these realities can also reproduce existing relations of power. Are solidary spaces conducive to participatory politics? If so, how do activists and migrants construct their own identities in the struggle, and how do they translate them into practice? What power dynamics are re-inscribed in their action? My research will attempt to answer these questions through a case study of Ventimiglia, a town at the Franco-Italian border, and the waves of solidarity activism that have taken place there from 2015 to the present. We extend our heartfelt thanks to the Vahabzadeh Foundation for financially supporting the publication of best works by young researchers of the Graduate Institute, giving a priority to those who have been awarded academic prizes for their master’s dissertations.