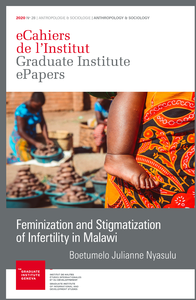 Feminization and Stigmatization of Infertility in Malawi — Ebook

The World Health Organization defines infertility as the inability to conceive after 12 months of regular and unprotected sex (WHO, 1975). Despite research that has shown that 50 per cent of infertility cases can be attributed to the male partner, in many societies the blame is cast on the woman, her voice silenced, and any action taken by the man deemed justifiable. Infertility affects millions of people across Sub-Saharan Africa, and in a socio-cultural context where children are valued as a source of wealth for the family, perceived infertility can result in neglect, abuse, marital instability, banishment, discrimination and social stigma (Barden-O’Fallon, 2005). The topic of infertility is often considered to be a taboo subject, with women being accused of witchcraft, prior abortions or prostitution. Malawi is a small country in Central-East Africa, bordered by Tanzania and Mozambique, with a population of 18 million, 85 percent of which resides in rural areas. Similarly to other countries in the region, fertility is highly desired and valued. Malawi’s total fertility rate (TFR) has declined over the years, but still sits relatively high, at 5.49 children per woman as of 2017 (Index Mundi, 2018). In demographic discourse, this declining fertility rate is often celebrated as a sign of the country moving towards a more industrialized economic system. However, this rhetoric on demographic transition invisibilizes the social and psychological consequences of infertility, experienced in varying contexts. This thesis will examine the social stigmatization and feminization of infertility in Malawi, and specifically how stigma is understood and managed in the context of socio-cultural perceptions of infertility, within the local ecology of Malawi, as well as its effect on lived experiences and gender identities. Data was collected from four participant groups – infertile women, religious leaders, health workers, and community members through interviews, discussion groups, and informal conversation. The empirical findings demonstrate that infertility does not exist solely as a biological or physiological condition, requiring a biomedical approach, but rather encompasses emotional, social, cultural, religious and economic spheres. As such, the approach to infertility response must also include these spheres, focusing not only on preventive measures but also addressing stigma, patriarchal structures, gender inequality, poverty, and sexual and reproductive health knowledge. We extend our heartfelt thanks to the Vahabzadeh Foundation for financially supporting the publication of best works by young researchers of the Graduate Institute, giving a priority to those who have been awarded academic prizes for their master’s dissertations.