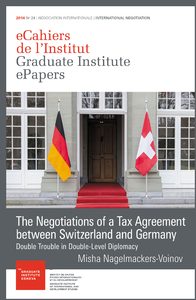 The Negotiations of a Tax Agreement between Switzerland and Germany — Ebook

This ePaper analyses the negotiations of an agreement on tax cooperation between Switzerland and Germany in 2012. The paper looks at the importance of the balance of power and reveals how domestic constraints and a shrinking win-set can affect double-level negotiations. It also offers an illustration of how governments can shape domestic politics by using international debates while still facing conflicting interests along the increasingly blurred line of domestic and international interests. It argues that the failure of international negotiations comes from actors misreading their own domestic political or ratification processes, rather than from parties’ incomplete information about each other’s political or ratification processes. Most of all, it shows how “politically constructed ideologies” and stereotypical views – in this case the definition of "fair" taxes or the concept of "privacy" – make it nearly impossible to reach an agreement.