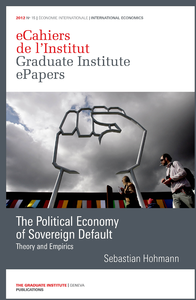 What do self-interested governments’ needs to maintain loyal groups of supporters imply for sovereign incentives to repay debt? Many sovereign defaults have occurred at relatively low levels of debt, while some highly indebted nations continue to honour their obligations. This poses a problem for traditional models of sovereign debt, which rely on the threat of economic sanctions to explain why and when a representative agent seeking to maximise social welfare would choose debt-repayment. The political-economy model of sovereign default developed in this ePaper shows that those governments that depend on small groups of loyalists drawn from large populations are more likely to default on sovereign debt than those governments dependent on large groups of supporters. These findings contribute to a growing body of literature on the importance of institutions in sovereign debt and default.