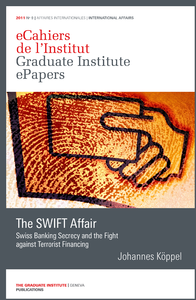 Swiss Banking Secrecy and the Fight against Terrorist Financing

The story broke in 2006: Since 9/11, US intelligence services have had access to practically any international money transfer data by infiltrating the SWIFT (Society for Worldwide Interbank Financial Telecommunication) network. Banks worldwide transfer money orders and personal customer data through this network. While the surveillance was all-embracing in 2001, it was gradually limited over the course of the last few years. Revealed by the New York Times, the SWIFT affair has had global as well as national implications. While this dissertation first examines the international dimension of the SWIFT surveillance, the analysis mainly focuses on the national repercussions for Switzerland. Arditi Prize 2010 in International Affairs.