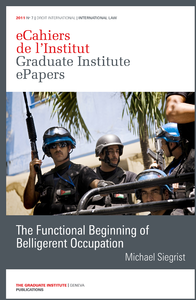 Since the mid-19th century military powers and various writers have tried to define the notion of belligerent occupation and, in particular, the beginning thereof. There are many situations in which a state of occupation is controversial or even denied. When is control so effective that an invasion turns into a state of belligerent occupation? What is the minimum area of a territory that can be occupied; a town, a hamlet, a house or what about a hill taken by the armed forces? This paper examines what seems to be an important gap of the Fourth Geneva Convention: contrary to the Hague Regulations of 1907 it does not provide a definition of belligerent occupation. It is argued that the Fourth Geneva Convention follows its own rules of applicability and that therefore the provisions relative to occupied territories apply in accordance with the “functional beginning” of belligerent occupation approach from the moment that a protected person finds him or herself in the hands of the enemy. Henry Dunant Prize 2010 from the Geneva Academy of International Humanitarian Law and Human Rights (ADH Geneva)