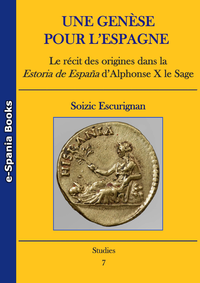 La Estoria de España, written under the aegis of Alfonso X the Wise, King of Castile and León (1252-1284), traces the history of the Iberian Peninsula and more specifically of Castile, from its origins to the 13th century. While many renowned researchers have studied the Estoria, all of this work, which is also essential, only offers a partial view of the first part of the chronicle. No comprehensive study has in fact been devoted to the story of the origins. However, in order to measure the richness and complexity of peninsular history, it is necessary to take into account this large time interval between the beginnings of humanity and the year 711. The domination of the Greeks, the Carthaginians, the Romans, the Barbarians and the Visigoths, the collapse of the Kingdom of Toledo and the beginnings of the Kingdom of Asturias do indeed constitute a story of the origins. The author of the book therefore starts from the premise that the first 565 chapters of the Estoria cannot be considered as a mere preliminary without any political significance. Several questions are thus at the origin of this work: how do the new challenges of the 13th century (expansion of the borders of the kingdom, fecho del Imperio, new political conceptions, opposition of the nobility and the clergy, monopolization of writing by the king...) influence the conception of Spain's past? How does the Wise King found the greatness of the Iberian Peninsula, how does he legitimize its foundations and how does he define the exercise of royal power? The analysis of the different episodes, of the numerous portraits, of the relationships between the characters, as well as of the writing processes makes it possible to bring to light the textual and ideological originality of this part of the chronicle and the links between the Estoria and the Alphonsine ideal defended in the other works of the Wise King. Unraveling the biblical, ancient and medieval structures and topics used by the Wise King, the author reveals the different networks of symbolic, political, sapiential and spiritual transmission that are at work in the story and thus highlights the way in which the sovereign, by celebrating a common territory and past, guarantors of Hispanic identity, develops a myth of national creation; which allows Soizic Escurignan to conclude that the story of the origins is meant to be programmatic, and more than that, performative.