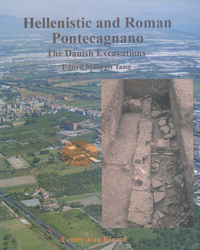 The Danish Excavations in Proprietà Avallone 1986-1990

This volume presents the results of the excavations conducted by the University of Copenhagen at Pontecagnano (Prop. Avallone), located some 8 km southeast of Salerno in the northern part (the Ager Picentinus) of the Sele Plain in Campania. The excavations revealed a part of the residential zone of the ancient town with two main phases of occupation, the first belonging to the late Classical/early Hellenistic period (second half of 4th to early 3rd century BC) and the second to the late Republican period (2nd to first half of 1st century BC). Both phases represent crucial periods in the history of Southern Italy. The first is a period of turmoil due to the Roman penetration southwards, while the second period falls after a period of crisis after the Second Punic War. The structures of the first phase form part of a general reorganization of the Etruscan-Campanian settlement and testify to a community of some wealth. A habitation unit provided with a stone-paved courtyard and polychrome stucco illustrates this. In the second phase the zone was only partly reoccupied. During Imperial times the area was frequented in a sporadic manner. The book adds considerably to our knowledge of the settlement of ancient Pontecagnano. It is the most complete work on a habitation context published so far, and it offers a fine selection of all groups of archaeological material from this important site.