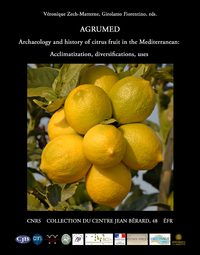 AGRUMED: Archaeology and history of citrus fruit in the Mediterranean — Ebook

The book brings together 16 contributions on the ancient and recent history of citrus fruits. Although they represent the main fruit production on a worldwide scale, very little is known about their original domestication and routes of introduction into the Mediterranean and temperate Europe: few organic remains identified as citrus have been found on archaeological sites. Nevertheless, evidence has been retrieved for various periods in the form of pollen grains, seeds, rind fragments, and occasionally wood and whole fruits in areas of primo-domestication, Asian, and from sites along the potential routes of diffusion. Iconographic figurations and textual references also exist. The contributions presented here – written by researchers specializing in phylogeny, taxonomy, morphometry, archaeobotany, history, iconography, the study of classical letters, and curators of collections – present the latest knowledge relating to the taxonomy of the Citrus genus and the methods used in attempting to identify ancient specimens. Analysis of botanical remains and a variety of other sources, has allowed the citrus diversity in China, India, Israel, Egypt, Italy, and North-West Europe to be described. Greek, Latin and medieval texts have been explored in order to identify recognized species, cultivation methods, modes of consumption, uses, and virtues attributed to citrus fruits since their first occurrences. The conservatories and germplasm collections of citrus are presented from a historical point of view, as are the important role they play in genetic research to improve cultivars, the conservation of rare and ancient varieties, and the role of informing the general public is also emphasized. The symbolic representation of citrus fruits in the arts, literature, and philosophy completes this overview, and fills a gap concerning these emblematic Mediterranean fruit.