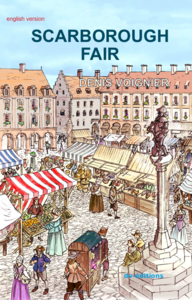 The legend of Scarborough dates from the sixteenth century; it perhaps even pre-dates this period. Oral transmission does not afford perfect reliability, all the more because this legend is indeed multifaceted.

Elves, knights, Scotland, England, the bases differ, as well as the characters.

One single thing links these different versions: love. The novel is set at the start of the seventeenth century, under the reign of Charles the First, in an England where tensions are beginning to be felt. The shadow of Cromwell hovers over the crown, and the Black Plague

is wreaking havoc, especially in the south of the country.

In Scarborough, where the prestigious annual fair takes place, Jane and William meet each other. She is a healer, gifted with strange powers, which could be related to highly developed magnetism; he is a printer in York. Love strikes them immediately, at first sight.

But serious obstacles disrupt this romance. Jane and William will have to impose on each other tests that are considered insurmountable, in order to find each other again...

Denis Voignier has been a published writer since 2001. His preferred domains are history and intrigue. This is his twenty-fifth novel, which combines love, reality and fantasy.