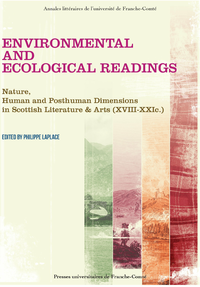 The global risks posed by our industrial and post-industrial societies have brought environmental issues to the forefront of reflections and preoccupations in the postmodern world. One critical – and crucial – outcome of this state of affairs is the realization that artistic and literary representations of Nature and the environment need to be studied ever more closely if we are to adequately understand our relationship with our habitat and the impact we have had, and continue to have, on our planet. This volume features seventeen articles from French and international scholars covering a wide range of genres, from eighteenth-century travel writers to contemporary poets, playwrights and novelists. The essays consider Nature and the environment in their relationship to men and women and question how mankind is set to evolve in a contemporary world that is increasingly perceived as posthuman. They show how these concepts have affected Scottish authors and literature produced in Scotland. Presented chronologically, the essays highlight how each of the authors featured may have influenced the ensuing literary tradition. While the first section focuses on eighteenth and nineteenth century Scottish poets, novelists, artists or travel-writers, the second turns its attention to twentieth and twenty-first century authors, with an emphasis on modern and postmodern considerations, including the future of the human species from a posthuman perspective. The collection is particularly noteworthy for its showcasing of previously unpublished material and stands as a significant contribution to arts research in ecocriticism and in the Scottish artistic and literary fields.