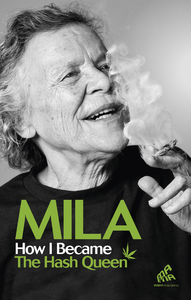 How I Became The Hash Queen — Ebook

How I Became the Hash Queen is an exciting personal account from one of the cannabis industry's rare female icons, a life story unlike any other that takes us from 1960s Amsterdam to the Himalayas, and to the burgeoning legal weed scene in the U.S.

Mila's autobiography is intriguing and inspiring on many levels. As a mother, inventor, traveler, lover, and spiritual practitioner, she has taken incredible risks and embarked on unimaginable adventures. Reinventing herself and creating businesses over and over, Mila supported her children and was a rebel at the same time. Her story is, by turns, a riveting travel-log of trekking through uncharted passes and to secret monasteries, and part ultra-personal account of love stories and heartbreaks. Mila takes us with her to the first parties on the beach in Goa, India, and into the heart of the sixties revolution in fashion and music in Amsterdam. Through it all, she faces the challenge of being a single mother, even as she becomes a pioneer in a traditionally male industry with her game-changing inventions, which have shaped the future of hash-making. This book offers an inside view into a wide variety of alternative worlds and experiences, in the company of a fascinating woman.

Mila, also known as “The Hash Queen,” was recently honored with being named one of the 100 most influential people in the world of cannabis—and her fame continues to expand.