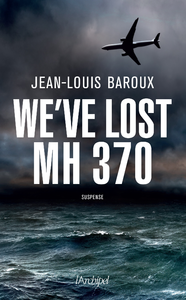 We have lost the MH370 - Version en anglais — Ebook

On 8 March 2014, a Boeing 777 of Malaysia Airlines took off at 0:41 a.m. from Kuala Lumpur International Airport. Its destina- tion: Beijing. On board were 239 people. In the early morning, the airline announced that the aircraft had disappeared. The greatest mystery in the history of modern civil aviation had begun... What happened to flight MH 370? Was it shot down by a missile? Was it hijacked and its passengers put to sleep, and did it crash into the waters of the Indian Ocean after a long voyage? Through fiction, Jean-Louis Baroux, one of the best international aviation specialists, puts forward a totally new theory to explain this mystery: what if this crash resulted from a fight to the death between two airlines? Because he knows air transport operators so well, Jean-Louis Baroux has penned a suspense story pulling together adventures and espio- nage, money and honor. Detectives, secret agents, emirs, CEOs, pilots, air traffic controllers and insurers: all the actors of this little known world meet up in a dramatic and captivating face-off.