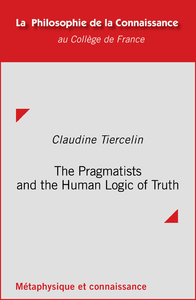 The Pragmatists and the Human Logic of Truth — Ebook

The expression “human logic of truth” is Frank P. Ramsey’s:“Let us therefore try to get an idea of a human logic which shall not attempt to be reducible to formal logic. Logic, we may agree, is concerned not with what men actually believe, but what they ought to believe, or what it would be reasonable to believe. What then, we must ask, is meant by saying that it is reasonable for a man to have such and such a degree of belief in a proposition?” Many themes developed by Ramsey in his work (on belief, truth, knowledge, but also in ethics)manifest the outstanding inspiration of the founder of pragmatism, C. S. Peirce, who is explicitly referred to in several places. Fundamentally, Peirce’s conception of truth is such that he who searches it may be able and forced to adopt it. The human logic of truth he defends goes hand in hand with the view that “real pragmatic truth is truth as can and ought to be used as a guide for conduct”. While the views of other major pragmatists (William James, John Dewey, and Hilary Putnam) are also carefully analyzed and contrasted, Peirce’s conception is shown to present at least three advantages: “to provide the rational framework for inquiry to proceed” (it is genuinely “logical”), to “make sense of the practice of inquiry as the search for truth”, as something which is not transcendent, beyond inquiry, but accessible (it is genuinely “human”), and finally “to justify a methodology” by encouraging the inquirer to put his beliefs to the test of experience.