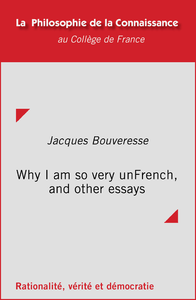 Why I am so very unFrench, and other essays — Ebook

For those like myself, who found the politico-philosophical terrorism beginning its reign at the beginning of the 1960s intolerable, analytic philosophy in contrast could not but offer the comforting image of what a democratic philosophical community should be: civilized and tolerant, where all citizens equally must offer arguments and be willing to listen to and discuss possible objections. This sort of community was the last thing we could hope to ask for in the philosophical milieu of that time. It goes without saying that our conception of analytic philosophy then owed much to idealization and naivety. But I’m still convinced today that for someone who holds democracy to be of the highest importance (even more important than philosophy itself), the scientific community and its methods should continue to offer an example from which philosophy might draw inspiration. It is an example, in any case, that philosophy should not allow itself to ignore, as happens most of the time in France. While reading very closely Paul Valéry, Rudolf Carnap and Nietzsche as well as Richard Rorty, Bernard Williams and Michael Dummett, Jacques Bouveresse opens up his own way through philosophy. As an ironical rationalist, whose eye has been educated by a longstanding familiarity with Robert Musil’s and Ludwig Wittgenstein’s works, he is certainly not a so-called “French philosopher”, but neither exactly an analytic one. The five essays collected here have been written between 1982 and 2006.