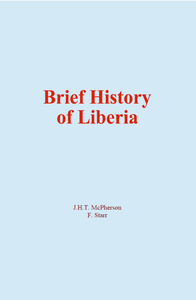 The Republic of Liberia has been the scene of a series of experiments absolutely unique in history; experiments from which we are to derive the knowledge upon which we must rely in the solution of the weighty problems connected with the development of a dark continent, and with the civilization of hundreds of millions of the human race.

The history of Liberia may be regarded as a demonstration of the capacity of the race for self-government. Upon the capability of individuals is reflected the highest credit. The opportunities for a rounded-out and fully developed culture afforded by the peculiar conditions of life in the Republic produced a number of men who deserve unqualified admiration. From the earliest days of the colony, when Elijah Johnson upheld the courage of the little band in the midst of hostile swarms of savages, to the steadfast statesmanship of Russwurm and the stately diplomacy of Roberts, there have stood forth individuals of a quality and calibre that fill with surprise those who hold the ordinary opinion of the possibilities of the Negro. The trials of the Republic have afforded a crucial test in which many a character has shown true metal. It is not too much to assert that the very highest type of the race has been the product of Liberia.