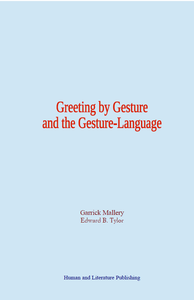 Greeting by Gesture and the Gesture-Language — Ebook

Verbal salutations have generally been employed to explain those expressed by gesture and posture. The study of ancient literature and of modern travel has furnished many friendly phrases of anthropologic and ethnic interest. But friendly greetings were common before articulate speech prevailed. Sign-language was then the mode of communication, and gestures connected with the concepts and emotions of men preceded and influenced all historic ceremonials of greeting. So it is judicious to resort to gesture-speech, as still found surviving among some peoples and deaf-mutes, for the explanation of the existing and still more of the oldest known forms of salutation, whether verbal or silent. Undoubtedly some of the verbal forms are of recent origin and are independent of any gesture, and such cases require separate discussion; but there are many known instances where greeting is and long has been expressed by gesture without words, and others in which the words used, conjointly or independently, are but derivations from the older, perhaps disused, gestures.

In this application of sign-language the characteristics of that mode of expression appear with distinctness, noticeable among which are the variety of shades of meaning conveyed by substantially the same gesture and the different modes of exhibiting the same substantive concept. Sign-language is more elastic as well as more comprehensive than oral language. Its abbreviation and symbolism are also so clear that linguistic lore and etymologic guess are not needed for their explanation.

The main divisions of the subject to be now considered are I. Salutations with contact; and, II. Salutations without contact. Under the first division it is convenient to notice successively those directly connected with the sense of: touch; smell; taste — although that is not the probable order of their evolution.