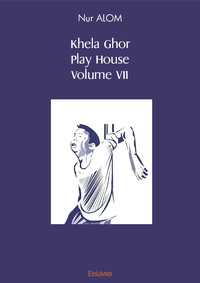 Volume VII of Nur Alom’s Play House continues the story of his struggles. After ten years living in France, he returns to the land of his birth, Bangladesh. Much has changed in his family home: his father has been killed, his reading hut is gone, the house has deteriorated, many of the trees are gone, and his sister-in-law Koruna, who now more or less rules the house, does not like his being there. She encourages others in the family to scheme against him, to get him married off and thereby to get all his wealth.


What follows is a long series of efforts by Koruna and her allies to marry him off, cheat him out of his wealth, and prevent him from returning to France. Will he ever get back to France?