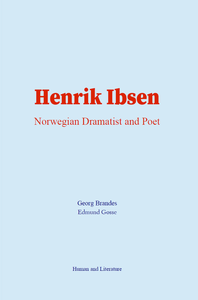 This book deals with the life and works of Henrik Ibsen, the Norwegian Dramatist and Poet; with his personal and intellectual characteristics.

Henrik Johan Ibsen was born on March 20, 1828, at the little seaport of Skien, situated at the head of a long fiord on the south coast of Norway.

When, at thirty-six years of age, he left Norway to go into that exile from which he has not yet returned, it was with a heavy and embittered heart, after a youth passed on the sunless side of life.

His parents, on their paternal as well as maternal side, belonged to families of the highest standing in the town. His father was a merchant, engaged in varied and extensive activities, and enjoying the exercise of an almost unlimited hospitality. In 1836, however, the worthy gentleman was compelled to suspend payments, and from the wreck of his fortunes nothing was saved for his family but a country estate a short distance from the town. Thither they removed, and were thus carried beyond the range of the circles to which they had previously belonged. In "Peer Gynt" Ibsen has employed the recollections of his own childhood as a sort of model for his description of life in wealthy Jon Gynt's home. As a lad, Henrik Ibsen became apprentice in a drug-store. He worked his way through countless difficulties before he was able, at the age of twenty-two, to enter on a student's career; even then he had neither inclination nor means for professional study; for a long time he had not so much as the means to secure for himself regular meals. His youth was hard and stem, his daily life a straggle; the paternal roof seems to have offered him no place of refuge.