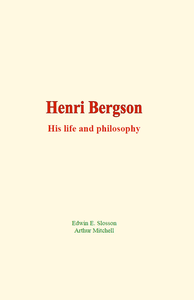 His life and philosophy

Henri Bergson was born in the heart of Paris, the Montmartre quarter, in 1859. He was awarded the Nobel Prize in Literature for his rich ideas and the brilliant skill with which they have been presented.

“The history of philosophy shows us chiefly the ceaselessly renewed efforts of reflection laboring to attenuate difficulties, to resolve contradictions, to measure with an increasing approximation a reality incommensurable with our thought. But from time to time bursts forth a soul which seems to triumph over these complications by force of simplicity, the soul of artist or of poet, keeping close to its origin, reconciling with a harmony felt by the heart terms perhaps irreconcilable by the intelligence. The language which it speaks, when it borrows the voice of philosophy, is not similarly understood by everybody. Some think it vague, and so it is in what it expresses. Others feel it precise, because they experience all it suggests. To many ears it brings only the echo of a vanished past, but others hear in it as in a prophetic dream the joyous song of the future. These words, which Bergson used in his eulogy of his teacher, Ravaisson, before the French Academy of Moral and Political Sciences, may be applied with greater appropriateness to Bergson himself.”