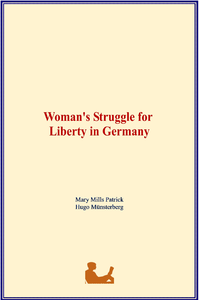 This book treats of woman's Struggle for Liberty in Germany, and the development of instruction for the two sexes.

“The girls' schools established by the Government provide well for the study of the modern languages, and it is the exception to find women in the upper classes who do not speak French and English. Literature, religion, gymnastics, and needlework are also well taught. The course of study in the high school includes a little mathematics, offered under the name of reckoning, and sufficient to enable a woman to keep the accounts of a household, and also a little science of the kind that can be learned without a knowledge of mathematics. Let me quote a paragraph from the report of the Minister of Public Instruction for the year 1898 in regard to the aim of the mathematical course in the girls' high schools: "Accuracy in reckoning with numbers and the ability to use numbers in the common relations of life, especially in housekeeping. Great weight is laid upon quick mental computations, but in all grades the choice of problems should be such as especially apply to the keeping of a house." This is the opportunity which is offered to girls by the Government in the department of mathematics! In addition to the two grades of schools mentioned there are seminaries in many of the large cities for the purpose of educating women teachers. The instructors in these seminaries are well prepared for their positions, are mostly men, and the instruction given is very superior to that given in the girls' high schools. Latin and Greek are, however, not studied in these seminaries, and mathematics and science are expurgated, we might say, of points that might prove difficult for the feminine intellect...”