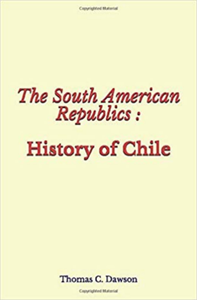 This book deals with the general history of Chile from the discovery and the Spanish conquest.“About a century before Pizarro landed, Tupac Yupanqui, the greatest of the Inca conquerors, crossed the rough mountains, bleak plateaux, and waterless deserts which lie between the habitable part of Bolivia and the irrigable valleys of northern Chile, and rapidly overran the coast for six hundred miles. As one goes south the plain broadens, the short rivers flowing from the mountains grow larger, the rainfall and the area available for cultivation increase, and from Santiago a wide valley, the heart of Chile, stretches between the Andes and the coast range, sustaining a dense population...”