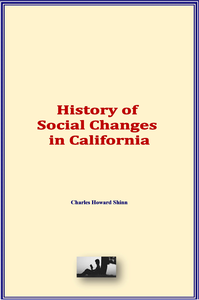 This book presents a brief History of Social Changes in California.

“When the Central Pacific Railroad crossed the high Sierras, and the Crockers, Stanfords, and Huntingtons, till then obscure Sacramento merchants, gained the first of their long series of industrial and political victories, a country blacksmith, the late Henry Vrooman, afterward State Senator and one of the greatest party leaders ever known on the Pacific coast, said to me: "That railroad changes forever all the conditions of human existence in California. It will never again be as easy to live here."

A thousand times since, events have shown that the gold-miners' El Dorado of 1849, which had become as different from the rest of the United States as South Carolina is from Massachusetts, was readjusting itself to new conditions imposed by the iron links that bound it to the Atlantic slope and the valley of the Mississippi. At first the change was slow and almost unnoticed.,...”