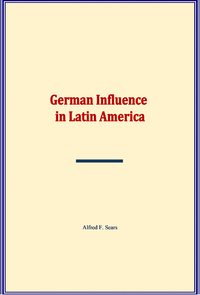 This book presents a brief story of German influence in Latin America.

“In 1901 the American citizen was startled by the information from Rio Janeiro, that "A German syndicate has just been formed with a capital of 25,000,000 Marks, with the object of colonizing in Brazil, the states of Rio Grande do Sul, São Paulo, Santa Catarina, Paraná, Minas Garaes and Goyas. The government has guaranteed 5 per cent, interest on the investment in the enterprise." At about the same time a further statement was published to the effect that the powers of Europe are combining to overthrow our formidable Monroe doctrine, through a society recently organized in Rome for colonization by Italians in various sections of Brazil. American newspapers declared "the German problem in South America to have been brought sharply to the attention of the national administration by this despatch" made the subject of editorials more or less intelligent all over the land. Some of the newspapers were sufficiently sane to offer their readers definite figures on which to base judgment of American duty. Generally, the patriotic bias developed but little jingoism in the complacent American press. Washington, from the heart of things, assured the nation that Germany is our firm friend, innocent of all design against the bogie we have raised on our neighbors' towers. While the passion of suspicion concerning the Kaiser's intention was yet alive, the writer was in South America to execute a scientific commission. He had previously spent sixteen years of active professional life in Mexico, Central and South America and believed that he could serve the interests of his country and the impulse of an improved civilization by presenting data for the intelligent consideration of questions involved in foreign colonization schemes among our southern neighbors and illustrating the results to be reached by Teutonic influence among the elements of Latin American life, now so grossly amalgamated with aboriginal barbarism, the slave and tool of Spanish medieval ecclesiasticism, which breeds and fosters social and political immorality...”