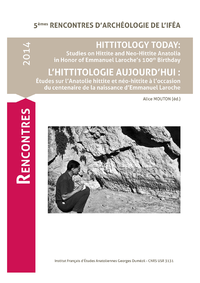 100 years ago, Emmanuel Laroche was born. As a scholar who was fascinated both by Indo-European Linguistics and Ancient Near Eastern and Classical Studies, he had a durable impact on Hittitology through his numerous contributions. His publications dealt with History of Near Eastern Religions, Cuneiform Philology, and Hittite, Luwian, and Hurrian grammar, among many other topics. This conference was organized in honor of his 100th birthday. Its aim was to discuss the recent developments in Hittitology, the ones to whom Emmanuel Laroche contributed and the ones which occurred after his time. The following themes are dealt with in this volume: Anatolian Linguistics, Cuneiform and Hieroglyphic Philology and Epigraphy, Religions of Bronze and Early Iron Age Anatolia, History and Historical Geography of Asia Minor, but also Near Eastern Archaeology, as Emmanuel Laroche was also very close to this discipline. Let us add to those fields Historiography which illustrates, among other things, the impact of Emmanuel Laroche’s work on today’s Hittitology.