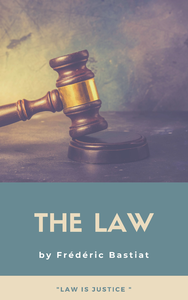 "Law is Justice" — Bastiat's most famous work is THE LAW, originally published as a pamphlet in 1850. It defines a just system of laws and then demonstrates how such law facilitates a free society. In The Law, Bastiat wrote that everyone has a right to protect "his person, his liberty, and his property".

Sample: "And, in all sincerity, can anything more be required at the hands of the law? Can the law, whose necessary sanction is force, be reasonably employed upon anything beyond securing to every one his right? I defy any one to remove it from this circle without perverting it, and consequently turning force against right. And as this is the most fatal, the most illogical social perversion which can possibly be imagined, it must be admitted that the true solution, so much sought after, of the social problem, is contained in these simple words—Law is organised Justice."