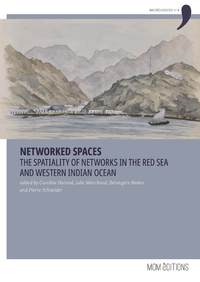 The 34 articles published in this volume form the proceedings of the 9th Red Sea conference held at Lyon in July 2019, whose core topic was the “spatiality of networks in the Red Sea”, including the western Indian Ocean. In the networked space that the Erythra Thalassa never ceased to be, stable factors such as landscape, climate, and wind patterns have been constantly entangled with more dynamic elements, such as human activity. The contributors to this volume explored how the former were integrated into the countless networks formed by humans in the region, and how these were impacted by spatial constraints over the long course of history. This volume offers a wide range of stimulating contributions. The first articles are devoted to medieval and modern European sources on the Red Sea and its exploration, and to the networks of knowledge dissemination about the region. They are followed by papers relating to the main nodes, the ports and islands of the Red Sea. Several articles are then focusing on the agency of hinterland populations in the networks, and the relationships between the regions bordering the Red Sea and central powers that governed them, often from distant lands. Production and consumption networks are the subject of the next articles, to assess the extent and nature of exchanges and to shed light on the archaeology of circulations. The logistics of exploration, exploitation and trade in the regions bordering the Red Sea are then examined. The last series of papers focuses on regions where archaeological work started only recently: Somaliland, Tigray, and the Horn of Africa. Thanks to all the participants, whether they have exploited new data or re‐examined long-known material, the 9th edition of the “Red Sea Project” gave rise to vibrant debates, showing that the Erythra Thalassa remains an endless source of knowledge.