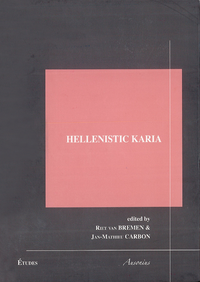 The conference on which the present volume is based took place in Oxford in the summer of 2006. It brought together linguists, archaologists, epigraphists, numismatists and historians and allowed them to exchange ideas about a period of major transition in Karian history: the fourth century and the two centuries after Alexander. This was first a period of great starapal visibility and presence, but then alsol of intense civic engagement and increased political awareness among Karian communities. The symbiotic relationship between the islands of the Dodekanese, in particular Rhodes and Kos, and the coastal regions of Karia forms another major theme. Finally, a number of papers pick up on a major recent trend in the study of Anatolian culture, namely the investigation of cross-cultural Greeak-Anatolian interactions in the Late Bronze and Early Iron Ages and their echoes in later periods.