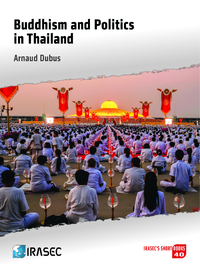 Buddhism and Politics in Thailand — Ebook

Despite the often-repeated assertion that Buddhism and politics are, or at least must be, separate matters, Buddhism has been closely intertwined with politics one way or another since the Buddha’s time. In Thailand, Buddhism has been used since the end of the 19th century as a tool to legitimate state power. In the following decades, it has been progressively centralized under a national hierarchy, which is still existing today. This scheme was not altered after the change of the country’s political framework in 1932 and political tensions with the sangha came to the fore during the political troubles of the 1970s. The emergence of an increasing political divide in Thailand since the mid-2000s, around two broad groups which have been dubbed the Yellow Shirts and the Red Shirts, has engulfed the monastic community, leading to a growing activism by some Buddhist groups, some temples and some monks. Numerous monks mingled with Red Shirts demonstrators in April-May 2010, and some were on the front-line when the military gave the assault on the Red Shirts’ camp in downtown Bangkok. In the most recent years, these tensions have coalesced around the controversial Dhammakaya temple and have impacted the choice of the leader of the Thai monastic community. Although, tensions within the sangha are nothing new, they have weakened the ability of Buddhism – one of the national pillars of the Thai national ideology – to be a focal point as the country is going through a difficult transition with the end of seven-decades prestigious reign and political uncertainties clouding the horizon.