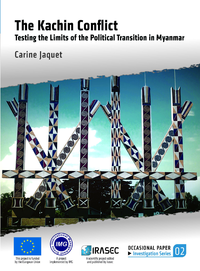 Testing the Limits of the Political Transition in Myanmar

Fighting in Kachin state flared back up just months after President Thien Sein came to power in March 2011. The new government almost immediately began negotiating a series of peace agreements with ethnic armed groups declaring that the signature of a nationwide ceasefire with all ethnic armed groups would be a priority for this first civilian administration. By convincing the majority of groups involved in armed struggle against the Tatmadaw to sign ceasefire agreements, the predominantly civilian government succeeded in winning some credibility, both nationally and internationally. At the same time, several old fault lines have re-emerged, among them the conflict in Kachin and Northern Shan States. The roots of the conflict in Kachin State between the KIO and government troops go back to grievances over control of the territory (and its lucrative natural resources) and the preservation of ethnic identity after the end of British colonial rule in 1948. The rekindling of this old conflict, after seventeen years of ceasefire, serves as a powerful reminder of the fragility of certain aspects of the transition process. The setback to conflict and blockage of peace process with the Kachin Independence Organisation (KIO) and its Army (KIA) show that some structural political issues remain, such as the recognition of local power structures and decentralization. While much has been written in the media about the legal, economic, and political reforms in Myanmar; academic research about the Kachin Conflict, as well as firsthand information remains scarce. Analyzing the causes of the conflict and current impediments to peace in Kachin territories provides an illustration of the limits of the transition process. This research examines the personal experiences of a strong sample of influential Kachin people, shows the complexity of notions of war and peace in the collective Kachin memory, as well as the reinterpretation of these by local leadership for political ends.