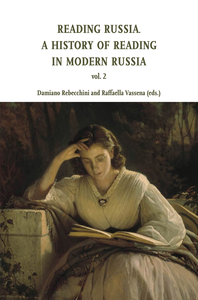 A History of Reading in Modern Russia

Scholars of Russian culture have always paid close attention to texts and their authors, but they have often forgotten about the readers. These volumes illuminate encounters between the Russians and their favorite texts, a centuries-long and continent-spanning “love story” that shaped the way people think, feel, and communicate. The fruit of thirty-one specialists’ research, Reading Russia represents the first attempt to systematically depict the evolution of reading in Russia from the eighteenth century to the present day. The second volume of Reading Russia considers the evolution of reading during the long nineteenth century (1800-1917), particularly in relation to the emergence of new narrative and current affairs publications: novels, on the one hand, and daily newspapers, weekly magazines and thick journals, on the other. The volume examines how economic and social transformations, technological progress and the development of the publishing industry taking place in Russia gradually led to a significant expansion of the reading public. At the same time, in part due to the influence of new literature reading policies in schools, there was a greater cultural standardisation of Russian society, which was partially opposed by new forms of poetic reading.