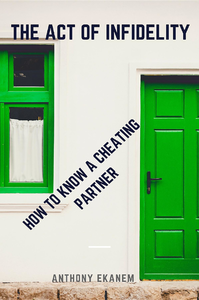 The Act of Infidelity — E-Book

How to Know a Cheating Partner

Infidelity is the greatest and most misunderstood of all relationship infractions. This small, sometimes one minute act of passion or revenge, has the capability to initiate a relationship and/or end a relationship at the same time. But what is Infidelity? Most people will classify infidelity as either a man having an affair with a woman while he is in a relationship or a woman having an affair with a man with whom she is not in a relationship. This is a basic definition of what infidelity entails. It merely scratches the surface of what makes up the playing field of being unfaithful. Infidelity has many names. It is called cheating, stepping out, a transgression, betrayal, unfaithfulness, perfidy, fooling around and so on. In addition to infidelity having many names, it also has many meanings. For the most part, the widely accepted definition of infidelity revolves around indulging in sexual intercourse with another man or woman who is not the married or committed partner. But there are many other meanings as to what defines infidelity and these are often determined by the individual who faces infidelity or by the one who commits the act of infidelity. The thing about infidelity, which is beneficial and at the same time confusing, is the fact that everybody can make up what infidelity means to them. This means that they do not have to be bound by anybody else's interpretation of what cheating or subdivisions of cheating may or may not actually be. Here's the hypocrisy when it comes to infidelity: for some, if you are in a relationship and you look at someone else in a lustful manner, then you have cheated. For others, if you are in a relationship and you indulge in a platonic relationship with another that your significant other does not know about, then again you have cheated.