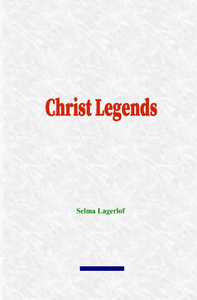 Selma O. Lagerlof was the first woman to win the Nobel Prize in Literature in 1909.

“It happened at the time when Augustus was Emperor in Rome and Herod was King in Jerusalem. It was then that a very great and holy night sank down over the earth. It was the darkest night that any one had ever seen. One could have believed that the whole earth had fallen into a cellar-vault. It was impossible to distinguish water from land, and one could not find one's way on the most familiar road. And it couldn't be otherwise, for not a ray of light came from heaven. All the stars stayed at home in their own houses, and the fair moon held her face averted. The silence and the stillness were as profound as the darkness. The rivers stood still in their courses, the wind did not stir, and even the aspen leaves had ceased to quiver. Had any one walked along the seashore, he would have found that the waves no longer dashed upon the sands; and had one wandered in the desert, the sand would not have crunched under one's feet. Everything was as motionless as if turned to stone, so as not to disturb the holy night. The grass was afraid to grow, the dew could not fall, and the flowers dared not exhale their perfume. On this night the wild beasts did not seek their prey, the serpents did not sting, and the dogs did not bark. And what was even more glorious, inanimate things would have been unwilling to disturb the night's sanctity, by lending themselves to an evil deed. No false key could have picked a lock, and no knife could possibly have drawn a drop of blood.

In Rome, during this very night, a small company of people came from the Emperor's palace at the Palatine and took the path across the Forum which led to the Capitol. During the day just ended the Senators had asked the Emperor if he had any objections to their erecting a temple to him on Rome's sacred hill. But Augustus had not immediately given his consent. He did not know if it would be agreeable to the gods that he should own a temple next to theirs, and he had replied that first he wished to ascertain their will in the matter by offering a nocturnal sacrifice to his genius. It was he who, accompanied by a few trusted friends, was on his way to perform this sacrifice. Augustus let them carry him in his litter, for he was old, and it was an effort for him to climb the long stairs leading to the Capitol. He himself held the cage with the doves for the sacrifice. No priests or soldiers or senators accompanied him, only his nearest friends. Torch-bearers walked in front of him in order to light the way in the night darkness and behind him followed the slaves, who carried the tripod, the knives, the charcoal, the sacred fire, and all the other things needed for the sacrifice.”