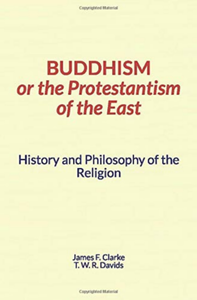 Buddhism, or the Protestantism of the East — E-Book

History and Philosophy of the Religion

This book deals with the History and Philosophy of the Buddhism.

"On first becoming acquainted with the mighty and ancient religion of Buddhism, one may be tempted to deny the correctness of this title "The Protestantism of the East." One might say, "Why not rather the Romanism of the East?" For so numerous are the resemblances between the customs of this system and those of the Romish Church, that the first Catholic missionaries who encountered the priests of Buddha were confounded, and thought that Satan had been mocking their sacred rites.Not so many years ago, at the time when Buddhism first became known in Europe through philosophic writings of about six centuries after Buddha, then newly translated, it caused amazement that a religion which had brought three hundred millions of people under its sway should acknowledge no god. But the religion of Buddha, during a thousand years of practice by the Hindus, is entirely different from the representations given us in these translations. As shown by the bas-reliefs covering the ancient monuments of India, this religion, changed by modern scientists into a belief in atheism, is, in fact, of all religions the most polytheistic.In the first Buddhist monuments, dating back eighteen to twenty centuries, the reformer simply figures as an emblem. The imprint of his feet, the figure of the "Bo tree" under which he entered the state of supreme wisdom, are worshipped; and though he disdained all gods, and only sought to teach a new code of morals, we shortly see Buddha himself depicted as a god. In the early stages he is generally represented as alone, but gradually appears in the company of the Brahman gods. He is finally lost in a crowd of gods, and becomes nothing more than an incarnation of one of the Brahman deities. From that time Buddhism has been practically extinct in India.This transformation took a thousand years to bring about. During part of this great interval Buddha was being worshipped as an all-powerful god. Legends are told of his appearance to his disciples, and of favors he granted them..."