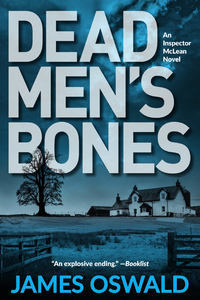 The murder/suicide of a prominent Scottish politician and his family brings Edinburgh-based Detective Inspector Tony McLean out to the countryside to investigate. The powers that be want a quick report and then to have the whole thing buried, but McLean believes there's more to the case than meets the eye.

The more lies he uncovers, the more McLean comes to realize there is a connection between the influential politician and another case he's working--the body of a man, stark naked and covered from head to toe in fresh tattoos, found in a river to the south of Edinburgh. But investigating the link between the two could have detrimental implications for his career, not to mention his life.

As McLean faces the pressure to wrap up the case, he comes face to face with an ancient evil that will put everyone he cares about at risk in Dead Men's Bones, the fourth installment of James Oswald's internationally bestselling series.